While mountain lions may be a common sight near the foothills in Utah, a dog deciding to defend her family and refusing to back down during an encounter certainly isn’t.

But that’s exactly what Ella, a hunting dog and family guardian, decided to do. Risking life and limb to do it, nothing was going to hurt her humans while she was on watch.

The scorching summer afternoon started out the same as any other, with the kids playing in their refreshing pool and Ella taking her position on her backyard rock wall. But before long, Ella made it clear that something wasn’t the same, and it soon became apparent to her humans too.

“She kept looking at the kids and then quickly looking back and she just kind of was very cautious. And my daughter thought it was very concerning,” shared Crystal Michaelis, Ella’s mom.

Ella had spotted a mountain lion, and was increasingly aware of its proximity from her family. While a mountain lion attacking a human is reported to be a rare event, Ella wasn’t taking any chances with the safety of her beloved pack. Though, nothing happened between them until her family had stepped inside. That’s why they didn’t witness their canine’s confrontation. 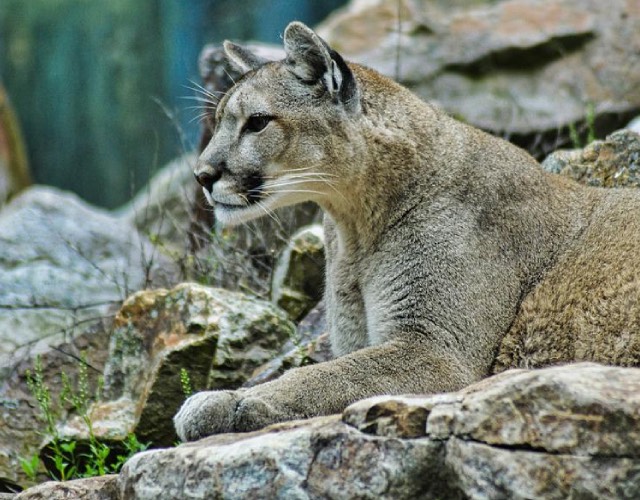 It was a sound at the door that alerted her family to what had happened. And from what they saw when they looked outside, it certainly wasn’t a low key fight. There was blood covering the patio and outside door, along with a considerable amount dripping from Ella’s fresh wounds. There were deep cuts on her head, nose, tongue, legs, and neck, and her body was covered in over 30 bites.

Their veterinarian shared the fact that her injuries only occurred on the front of her body, which indicates that Ella didn’t back down or turn her back during the fight. She remained incredibly protective and defended her territory along with her family.

Recently, deer, the main food for mountain lions, have been spotted moving through the area. So local experts agree that they are more than likely the reason the mountain lions have been hanging out nearby. Mountain lions, also called cougars or pumas, are widespread throughout the United States. They are adaptive to many habitats and are inclined to follow their food source. Though they have continued to look, wildlife experts have yet to spot the mountain lion again and aren’t sure of its current whereabouts. Lucky for this family protector and beloved companion, Ella is expected to make a full recovery. After engaging in a fight to defend her family, seven-year-old Ella sure is an incredibly good girl.


This Article Fetched from iheartdogs.com

Dog Training: How To Completely Train Your Dog

How Much To Feed Your Dog and Other Nutrition Questions Answered

We will be happy to hear your thoughts

“aheartforpaws is a participant in the Amazon Services LLC Associates Program, an affiliate advertising program designed to provide a means for sites to earn advertising fees by advertising and linking to Amazon.com“

As an Amazon Associate, we may earn commissions from qualifying purchases from Amazon.com. You can learn more about our editorial and affiliate policy